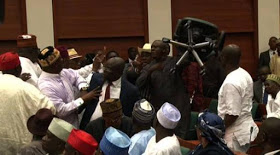 The crisis at the Benue State House of Assembly continued on Thursday as the Speaker, Mr Terkimbi Kyange, walked out Channels Television’s crew from the chamber.

The TV station had captured the messy fight between two lawmakers at the state’s assembly the previous day. It was gathered that on arrival at the Assembly chamber, the Channels Television’s correspondent, Pius Angbo, was walked out by the Speaker’s Chief Press Secretary and the Sergeant At-Arm,
on the strength of the Speaker’s directive to accredit all journalists covering the Assembly.