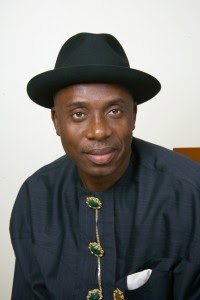 Director-General, Buhari Presidential Campaign organisation and Rivers State Governor Rotimi Amaechi has accused some church leaders of taking N6 billion bribe from the Peoples Democratic Party (PDP), to campaign against the presidential candidate of All Progressives Congress (APC), Muhammadu Buhari.
Amaechi made the allegation yesterday, at the APC governorship campaign rally in Emohua Local Government Area, Rivers State.
According to him, the religious leaders were allegedly distributing leaflets all over that Buhari had plans to Islamize the country if elected.
He therefore urged the clergy men to return the alleged bribe collected from the PDP.
“Some pastors collected N6 billion and they are circulating documents and telling you not to vote for an Hausa man; not to vote for a Muslim; that they want to Islamize Nigeria. Tell them to return our N6 billion.
“They gave them N6 billion. They should return it to the Federal Government coffers. They will tell you that Buhari wants to Islamize Nigeria; tell them we are too educated. I am a Catholic, but no Catholic priest has told me that story right now in the Catholic Church because, I will ask him how.
“If any pastor tells you that, tell him to return the money. Nobody can Islamize Nigeria. They have commercialised Jesus Christ. They should stop commercialising Jesus Christ. He is our Lord and Saviour.
“You know what Jesus Christ did in the temple, he chased them away. We shall chase away those pastors who have collected money from PDP to tell us lies. We shall chase them away on behalf of our Lord Jesus Christ.
“I told the President that the election in Rivers State is a referendum between him and me. I told him anywhere I will go, I will show what I have done. Let him show what he has done,” Amaechi said.