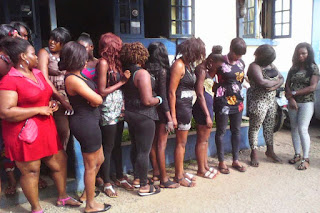 Three thousand commercial S3x workers have been arrested by the Federal Capital Territory (FCT) Special Task Team on City Cleaning and Management in the last 90 days.

They have been handed over to the Abuja Environmental Protection Board (AEPB) for prosecution and rehabilitation.
The task team also arrested 2,534 street hawkers and beggars. One hundred and two strayed animals were removed from illegal cattle markets in Gudu and other parts of the city during the period.
The team impounded 4,790 commercial motorcycles, 883 Keke Napep, 645 unpainted commercial vehicles and 84 illegal commercial buses.
Assistant Director/Chief Press Secretary (FCT), Muhammad Sule, spoke yesterday in a statement. He said the FCT Permanent Secretary, Mr. John Chukwu, an engineer, made the disclosure after a meeting with the Chairman of the Task Team and the FCT Police Commissioner, Mr. Wilson Inalegwu, in Abuja.