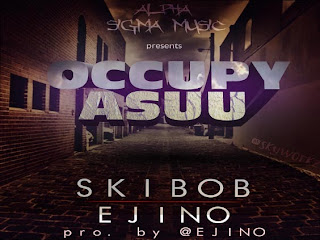 Five years after the original recording was done, OCCUPY ASUU has finally been released. This song was composed originally in 2008 during the first ASUU strike but failed to be released because of some technical difficulties, although a studio leaked version made it to the hears of a few who were opportuned to have listened. Composed by EJINO and vocalized by SKIBOB this version is slightly different from the original which was mainly acoustic with SKI playing the guitar. On this song the duo manage to tell a story of the depreciating standards of Nigerian institutions as they themselves have gone through these very institutions.
Check it out, Folks