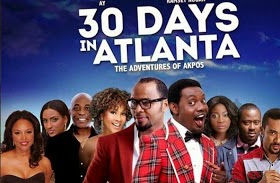 Yeah, it’s happened to comedian turned movie producer, Ayo Makun, too. His popular movie, 30 Days in Atlanta, which is Nigeria’s highest grossing cinema movie of all time, has been pirated. The pirates are now selling copies of the movie on the streets of Lagos. Below is his open letter to IGP.

Dear sir,
It is with the deepest sorrow that I pen these words. I have never understood the true meaning of the saying “only the one wearing the shoes feels the pain”, till recent times. Since the advent of Independent Producers, piracy has become the bane of the industry because as the saying goes ‘monkey de work, baboon de chop’.

The excitement that greeted the movie industry through the Box-Office success of 30 Days In Atlanta has quickly turned to sorrowful awe as I heard the news that the result of my sweat and sleepless nights has been sold by a traitorous miscreant, yet unknown, to a dubious marketer in Alaba. The news that would have made not just more Nigerians but also foreigners invest in Nollywood, has been dampened by the nefarious activities of intellectual pirates who hide in Alaba.
I have contacted Silverbird Film Distribution (whom I submitted the master of my movie to), Mr Afam Ezekude DG National Copyright Commission and Mr Ahbu Ventures who heads a session of Alaba where the Criminals are operating, Yet nothing visible has been done to take my movie off the street.
I have always heard of the risk faced by honest producers of loss of revenue due the activities of the incessant piracy cabals operating freely, without fear of the law in Nigeria and within the past few weeks, this has been my experience as I heard of the leak of my movie to various nefarious elements. Enough is enough of the economic hardship that is created for hardworking movie producers by some of these Alaba pirates who would do anything to reap from where they did not sow.
Sir, it has been argued that the impressive figures posted as revenue accrued to Nollywood are a mere drop in the ocean if the malaise of piracy is properly nipped by the effective implementation of the anti-piracy laws by the relevant governmental agencies. Alaba is part of Nigeria and as such the activities therein ought to be governed by the laws of Nigeria.
Even the laudable financial facilities made available by Mr President to be accessed by producers towards the development of the industry both as an employer of labour and a growing contributor to the annual revenue of Nigeria will be for naught if the piracy vampires continue to have a field day. The continued dominance of piracy will either lead to producers refusing to make more movies for fear of loss or that producers who go ahead to make movies using such funds will then be forced to become indigents because they will unable to pay back the loans accessed due to these vandals.
Sir, Nollywood is a multi-billion-naira industry and the opening of new cinema houses across the country is indeed cause for the celebration for both producers and lovers of Nigerian movies but the major challenges of the Nollywood industry from its birth till date has been the issue of transparent distribution channels and the malaise of piracy.
No more should a miscreant be celebrated or allowed to rape intellectual properties of honest hardworking citizens with impunity while the owners of the property impotently look on. No more should movie producers and other intellectual property owners scrabble to quickly make the little they can before ‘Alaba boys’ get their hands on the content and turn a goldmine into a dunghill.
I urge you to use your good office to use your actions in arresting the illegal spread of 30 Days In Atlanta as a standard for changing the status quo and letting the miscreants know that no one is above the laws of Nigeria.
I wait your intervention sir.
Thanks
AY