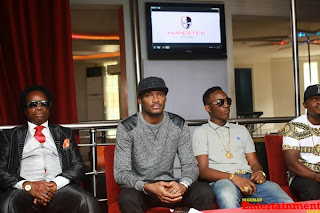 2face Idibia has announced the signing of prolific and veteran Nigerian musician Sir Victor Uwaifo to his new record label HyperTek Digital.
The announcement was made on November 30, 2013 at Club Rumours, Ikeja, Lagos. The details of the deal have not been disclosed but we know Uwaifo will be releasing new music under the label. ‘To belong to the artistes in HyperTek is my joy. I have the propensity to change. If you say it’s Jazz, I’ll play Jazz. If you say it’s Hip-Hop, I’ll play it‘, Uwaifo said at the unveiling. ‘My manager and I Efe Omorogbe, we’ve been talking about it for quite some time and we just decided to go for it. Sir Victor Uwaifo was really forthcoming and he was down with the idea and here we are today‘, 2face explains the reasons for the signing.
Uwaifo joins Pop artiste Dammy Krane and dancehall act Rocksteady as the fourth official artiste under the label. No other artistes have been announced for now.
The deal comes shortly after HyperTek rebranded and sold some shares to a parent company 960Music, founded by former Spinlet boss Eric Idahi.
Uwaifo is a Nigerian musician, writer, sculptor, and musical instrument inventor