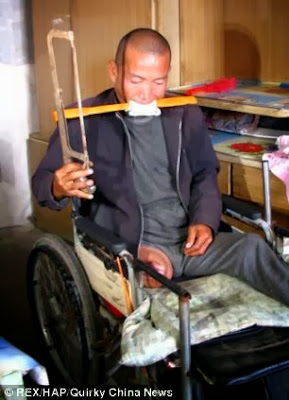 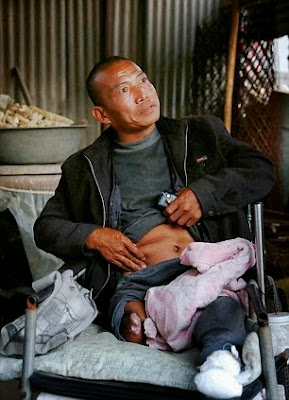 A man hacked off his own leg using only a metal saw, a small fruit knife and a back scratcher wrapped with a towel because he couldn’t afford hospital bills.

47-year-old Zheng Yanliang, from Boading city, China, began to experience bouts of pain in his abdomen that traveled to both of his legs. He was diagnosed with massive arterial thrombosis in both legs. As the pain worsened, he decided to remove the infected limb himself using a metal saw, a small fruit knife and a back scratcher wrapped with a towel towel because he couldn’t afford hospital bills.

According to  Shanghaiist.com, doctors told Mr Yanliang the disease was very rarely seen, and he wasn’t likely to live more than a month. For three months, Mr Yanliang was tormented by pain to the point of fuzzy consciousness, screaming so loud that his neighbors could not sleep.

‘It was very painful and they gave me medication but it didn’t help. Sometimes the pain was so intense I would pass out, then after three months when it was really bad, they told me that an infection had set in, that I had gangrene, and that I might lose the limb. Ideally I needed it to be operated on, but I could not afford it. They just gave me medication. They sent me home to die.

One night, after his wife had gone to bed, Mr Yanliang found a fruit knife, a metal saw and a towel-wrapped back scratcher and began amputating his own leg. Fortunately, because of the thrombosis, there wasn’t much blood during the amputation.

The operation saved his life, but now the open wound that still shows a stump of bone has led to a fresh infection, this time in his left leg.

His wife suffers diabetes and heart disease. The family’s only financial support comes from their 17-year-old daughter, who dropped out of school to take a job. 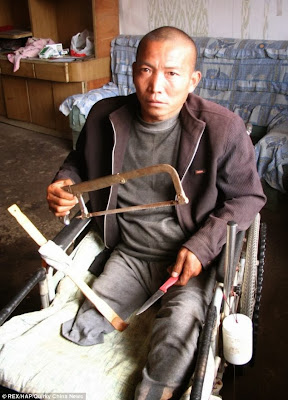 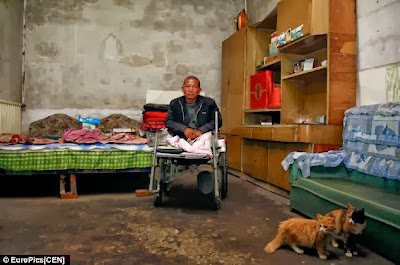