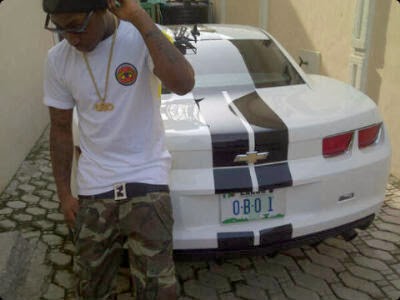 If you were at the Diamond bank end of the year party and you noticed that Davido didn’t really put up his best performance during the event well this is the reason why.
An unknown motorist and Davido got in a little accident due to impatience as the incident bashed Davido’s car we didn’t get a chance to see the other motorist car if it was also scratched or bashed but Davido’s multimillion naira Camaro was a little damaged cause he dropped down to check how serious it was. The traffic had soon built up as the roundabout on the lekki axis and later the Skelewu crooner was spotted driving into Landmark Village off Ligali Ayorinde, Victoria Island.