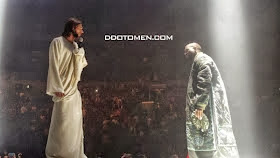 Kanye west must always get so extra religous with everything, and we’re not sure if that’s a good or bad thing.

Last night, Kanye West kicked off his highly anticipated “Yeezus Tour” in Seattle, WA with an impersonator of Jesus.

Here’s how MTV summarised the show:

There were flashing lights, flurries of snow, a dozen dancers, a red-eyed demon, a mountain, Jesus Christ and, of course, the incomparable Kanye West.

Before his opening march, Yeezy was preceded by 12 female dancers in flesh-colored tights, leaving nothing to the imagination. With the schizophrenic bleeps of “On Sight” blaring through the speakers, a masked-Yeezy strutted down the stage’s extension about 50 feet into the middle of the arena where he’d perform most of the night.

West fed the feverish crowd hearty helpings of tracks like “New Slaves” and “Mercy” before he would climb the set’s mountain to perform “Cold” from last year’s Cruel Summer compilation album.

There were several costume changes — first, a blue tank top matched with a gold mask; then, a puffy bomber jacket matched with a black mask. The concert’s narrative followed West on his quest to find his higher power. He eventually donned a white mask while his dancers waltzed down the stage, swinging thuribles, filling the KeyArena with Catholic incense. West went on to rap “I Wonder,” an emotional roll of “Hey Mama” and “Stronger” before an actor dressed as Jesus answered the MC’s call.

“White Jesus, is that you?” Kanye asks with childlike glee, finally taking off his mask before letting out a hilarious “Oh, sh–!”

The religious-themed theatrics led to his 2004 single “Jesus Walks,” which would bring the Northwest crowd closer to the show-closing “Bound 2.” At the end of his two-hour sermon, Kanye and his 12 female disciples bowed to Jesus on the mountain top, while the ‘Ye faithful gave all praises, shouting “Yeezus” until the house lights came on.