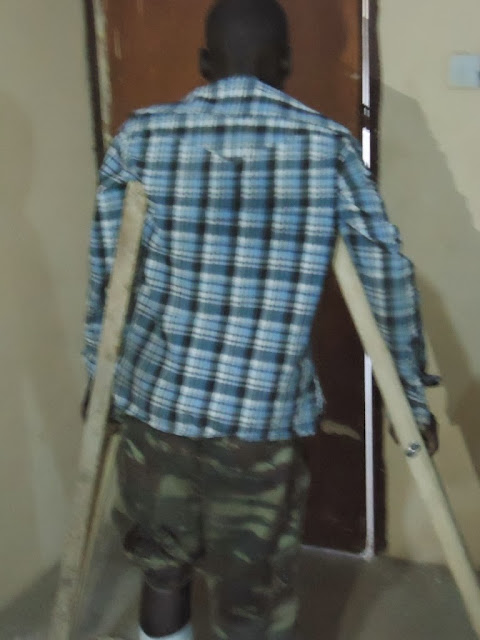 A 22-year-old suspected Boko Haram member, who was arrested during a military operation in Damboa local government two days before the eid-el-kabir sallah celebration had on Friday in Maiduguri, the Borno state capital told newsmen that, majority of the newly recruited islamist fighters as well as those who have been with the group for long were itching to lay down their arms and embrace peace. He said that the fear that they might be killed by other adamant members of the group has continued to discourage them.
Speaking to newsmen at the Brigadier Maimalari barracks in Maiduguri, the Boko Haram fighter said, he was compelled by his elder brother to join the “most wanted” group. He had disclosed that the said elder brother was killed in one of the battles with the military forces.
He said his brother had threatened to kill him and other members of their family if security operatives found out that he was hiding weapons in the family house.
He narrated thus, “During the last attack, I was shot on the leg and my people carried me because we do not leave our injured member behind. However, while running away from the military, they thought I had given up the ghost and there was no time for burial, thus they abandoned me in the bush.
“But after a while, I regained consciousness and dragged myself close to the town where some children saw me and ran to make reports to the elders, who subsequently informed the police and I was arrested.
“I was later handed over to the soldiers who brought me to Maiduguri for questioning. I was also told by the soldiers to speak with some reporters, whom I believe I’m talking with at the moment.”
The suspect who preferred to be called Omar said, contrary to the claim that, the Boko Haram insurgents were being asked to take an oath or are being induced with drugs as they join the group or when going on an operation, there had been no such things as oath or drugs, but mere indoctrination, which made some of them to believe strongly on what they were told. They were made to believe that they were ‘Allah’s’ instruments of war.

He said, once an individual joins the group, it becomes difficult to pull out, because every week or two, the units conduct head counts to know those who are around and those who are gone.
According to him, if anyone wants to go to town or anywhere, he must take permission from the superior and if any decides to leave the group, he is slaughtered.
“Many of my brothers who ran away were brought back. I witnessed how they were being slaughtered when the group went after them and arrested them. I was once a victim. I attempted to leave, in fact, I left and travelled to Lagos, but somehow, they got me back and I was to be slaughtered, but an argument ensued amongst our superiors. They latter resolved to give me a second chance. This happened before I was finally arrested.
He said that, although they were told that, they were rendering service to ‘Allah’, all the attacks they carried out and everything they had done, did not no agree with the teachings of the ‘Quran’.
“I cannot say that what we were doing was as directed by ‘Allah’, rather I see us taking lives and forcefully taking what did not belong to us, which to me, looks like banditry and not the work of ‘Allah’; even though they wanted us to believe that we were fighting ‘Jihad,’’ he said.
Speaking on how their living condition in the forest, Omar said, there is nothing friendly about living in the forest.
According to him, a part from the fear of their superiors, those who would have preferred to leave are also afraid of the security operatives and the youth volunteer group, popularly called Civilian JTF, who are also their most despised enemies.
He said, “Boko Haram as we are referred are divided into camps and are scattered all over the forest around Borno and Yobe states. In my camp or unit, we were about 150 holding all kinds of riffles. We have our doctors, Mechanics and almost every professional, who are older people in the group and they are our superiors.
We got our military uniforms from Cameroon and we also have people from Cameroon, chad and Niger republic amongst us. They are all members of the group.” He had narrated.