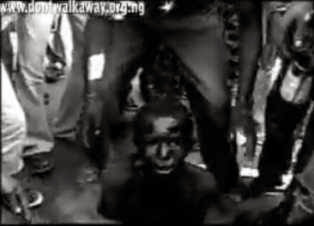 A six-year-old boy was burnt to death in a fire that engulfed a building in Iyana-Ifako area of Gbagada Lagos, wednesday night.

The deceased, identified simply as Abbey, was said to have been sleeping when the incident occurred.
Two of his elder brothers were said to have been rescued by sympathisers. The fire affected 10 rooms in the building located at 3, Ogunde Street, off Somori, Iyana-Ifako.
The cause of the fire, said to have started at 9p.m., could not be ascertained.

While occupants of the buildings scampered from their respective apartments for safety, eyewitnesses said shouts for help from some children in one of the rooms were heard.
Some of the sympathisers said to have gone for rescue mission, discovered that the door was locked.

One of the eyewitnesses said: “Their parents locked them inside and went out. Nobody knew where they went to. The door was forced opened and two of them rescued, though one of them was slightly burnt.

“It was while they got outside that the rescued children said their brother was still inside. By then the fire had engulfed the whole building and nobody could go in again.”

The Director, Lagos State Fire Service, Mr. Rasaq Fadipe, said fire trucks from Ilupeju and Ikeja responded to the distress call. He said the charred remains of the six-year-old boy was recovered