Rasim Aliyev, a 30-year-old photo and video journalist died from internal bleeding in Azerbaijan on Sunday morning August 9th after he was brutally attacked by relatives of a famous footballer on Saturday August 8th.
Rasim, in a Facebook post said that the football player, Javid Huseynov, should be banned from European football for making an obscene gesture at a referee.

“I do not want someone this amoral, impertinent and unable to control himself, represent me on European soccer fields” he wrote

According to reports, Aliyev was lured to a meeting by alleged relatives of the footballer where he was severely beaten up. He was helped by others who rushed him to hospital. He died the next day! 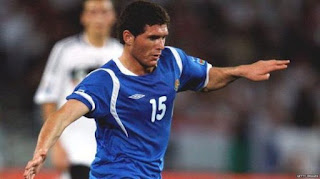 It wasn’t the first time Mr Aliyev criticized Javid. He had previously accused him of being ‘immoral and ill-bred’ after he waved a Turkish flag during a Europa League match in Cyprus.Javid who currently plays for the Azerbaijan Premier League side Gabala has been suspended by the club pending investigation.In a statement, the club said: “Despite the fact that Huseynov is a very important player for the Gabala team, he has been suspended from the first team until this issue is clarified”Javid Huseynov was arrested today August 11th along with three others.