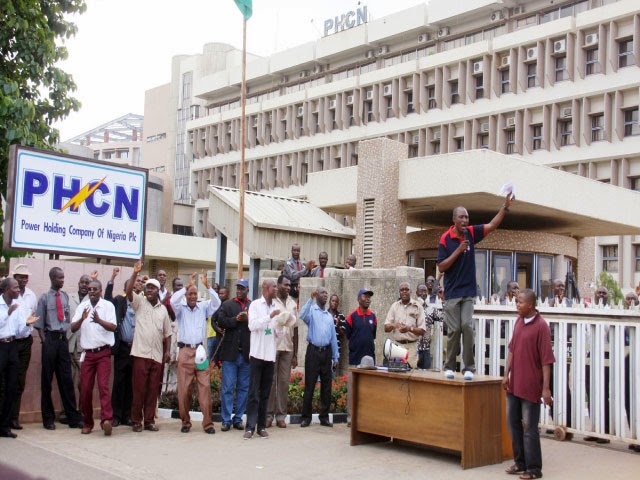 Over 2,000 workers of the Power Holding Company of Nigeria (PHCN) on Monday 28th October, embarked on protest over the delay in payment of severance benefits to about 55 per cent of the workforce.

The workers, under the aegis of the National
Union of Electrical Employees (NUEE), staged the protest at the Eko and Ikeja Electricity Distribution Companies and threatened to
commence indefinite strike on November 1.

“The reports reaching the union is that majority of banks cannot give financial backing to the schedule sent to them by the Federal Government.

“This means that government does not have money’’, Mr Adeleke Ibrahim, the Chairman of Lagos Chapter of NUEE, who led the protest, told the News Agency of Nigeria (NAN).

The union official said that if the workers’
entitlements were not paid by the end of October, the entire workforce of PHCN in all the 36 states would embark on indefinite strike.
Ibrahim said that the union was not against
privatisation of the company, “but government should pay all workers’ entitlements before the new owners will commence operation’’.

He appealed to government to ensure that all the agreements it signed with the workers were met to avert the strike. Ibrahim said that some of the issues in contention included non-payment of
retirement savings to pension fund administrators and non-remittance of dues of two per cent deducted from workers’ salaries to the unions.

Others are non-payment of benefits of retirees who disengaged in 2011 and non- regularisation of service of some casual workers.

NAN reports that the workers, who carried
placards with different inscriptions, locked the gates to the two offices and prevented people from entering the premises. (NAN)