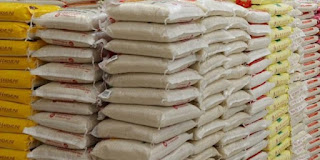 Chairman of Dangote Group, Alhaji Aliko Dangote, on Monday said Nigeria would be self-sufficient in rice, sugar and other commodities in the next four years.

He said this in Abuja at a meeting with the United Nations Secretary-General, Ban Ki-moon, Nigerian businessmen and some philanthropists.
Dangote, who spoke against the backdrop of his investments in the country, added that Nigeria would soon become the largest exporter of petroleum products and fertiliser.
He said he does not want to be known as the richest man alone, but also wants to lend his voice and other capacity to better the lots of Nigerians.
He commended the steps being taken by President Muhammadu Buhari’s administration in addressing the challenge of corruption facing the nation.
“War on corruption will enable government to have better outcome on any naira or dollar earned or spent,” he said.
He said government was taking measures to diversify the economy by promoting local production of essential commodities.
According to him, this will enhance the growth of the economy in job creation and preservation of scarce foreign exchange.
He said the business community in Nigeria would focus more on developing the non-oil sector to support the government efforts in diversifying the economy and reduce reliance on importation of goods.
“We are committed to improving the economy in a responsible and sustainable way,” he said.‎