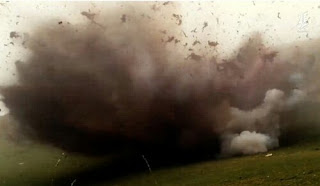 Vanguard reports that fresh multiple bomb explosions rocked Ajilari Railway cross of Gomari Airport ward of Maiduguri.
According to people living around the area, scores of people have been found dead or critically injured.
Ajilari cross is an outskirt of Maiduguri which has witnessed series of Boko Haram attacks including bombings in recent past.
The explosions which was suspected to have been masterminded by suicide bombers occurred simultaneously at about 7:38pm, while the last one took place at about 8pm which has forced many residents to flee into main city for safety.