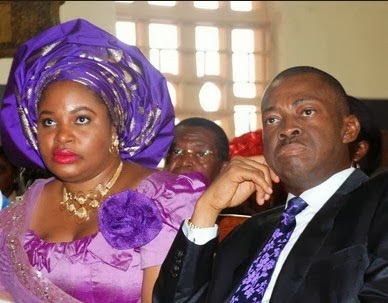 This is a classical case of not all that glitters is gold. Ladies really need to understand that getting married to a wealthy man is not all that matters, but a man that true loves you. Below is the current travails of Clara Chime, the wife of the governor of Enugu State. He is crying out for help.
Clara Chime, the First Lady of Enugu State, says Governor Sullivan Chime, has placed her under house arrest, and has cried out for help to human rights bodies to come to her rescue immediately.
In a letter dripping with pain and suffering, Mrs. Chime (pictured above with Governor Chime) disclosed that she married Mr. Chime in Oct. 2008 but revealed that she has not been able to sleep with him for over four years.
Describing her desperate situation, she said that even President Goodluck Jonathan and First Lady Patience Jonathan have intervened with her husband without success.
“My father is late, my Mum and few of my siblings are confused and have done all kinds of prayers they know of. 3 of my siblings prefers me dead than to see me leave the Government house. He treats my Mum and my siblings bad,” she wrote.
The Enugu State First Lady said she has been introduced to two psychiatrists whose names she gave as Dr. Onwukwe and Dr. Agumo, who have prescribed “all kinds of drugs that ends up keeping me acute depressed and also drives me into hallucinations.”
The doctors, she noted, are scared of her husband the Governor, to whom nobody can tell the truth.
According to the letter, the Catholic Bishop of Enugu state (Callistus Onaga), and top priests have come to intervene, as have the President and the First Lady of the nation, without success.
Mrs. Chime further complains that Governor Chime has ordered her to leave with her four-year old son whom she conceived before their wedding. However, the governor, according to her, later threatened to disown the boy should she leave with him.
“He has told everyone he can reach that there is no marriage between us that I can leave if I wish to but whenever I plan to leave he instructs them to lock me in. I have told him through Sms that I will leave my son behind and leave alone but still he instructed his securities to lock me inside the house.”
Mrs. Chime further complains she has lost touch with the real world and all that makes her beautiful because of the side effects of the drugs she is taking, stressing that she is under house arrest for committing no crime.
Of the situation in Government House, she said, “He does not take care of me personally, the government gives me allowance to run the house and that’s where I save little from to take care of my self, my Mum and few of my siblings. He shut me out of his life years ago; I don’t have access to his apartment. The problem is enormous; I don’t know where to start to explain from.”
She said that even the security detail in the lodge has resorted to praying for her, while the few that can be bought with money are taking advantage of the situation.
“Police and SS men have been instructed by Gov Sullivan Chime to confine me in a place for a long time now against my wish [but] it is my wish to leave this premises,” she said, begging, “Please assist me to reach to the human rights and say to them to please come hastily and release me.”
Just imagine what a first lady is going through…ladies, be wise!