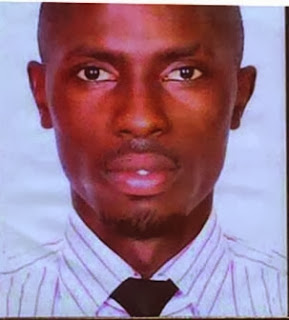 A 30-year old first class graduate of Economics from Ahmadu Bello University, Zaria, Moses Murtala Aminu, has been shot dead by a policeman.
The victim had left his 67, Ahmadu Ahijo Street, Narayi-Highcost family residence last week Sunday full of life for a party at Barnawa , Kaduna, but could not return home as he was killed by a police constable.
His friend and eyewitness told P.M.NEWS this morning that the police constable identified as Alex Okpe was beating up his girlfriend outside the venue of the party and when Murtala tried to intervene, he got angry and pulled out his gun from his jeans trousers and fired straight into his heart.
According to an eyewitness who spoke to P.M.NEWS under anonymity,  after Murtala was shot dead, the police constable then fired again in the air twice to scare the people around and escaped on his motorcycle.
Moses Andrew, a friend who was with Muri, as he was popularly called, at the Time Out Lounge party venue in Barnawa, narrated that there was pandemonium after Muri was shot and Okpe, the policeman, had escaped .

“We were confused while trying to revive Muri, when a guy informed us that he knows a friend to Okpe’s girlfriend that had left the party for a club called X-One at Barnawa,” Andrew said.
According to him, they quickly moved to X-One and fortunately met her there.
“We picked the lady who identified the policeman who killed Muri as Alex Okpe, and that he serves at Kakuri Police Station but deployed to guard Nigerian Brewries Plc.,”

Andrew added.
P.M.NEWS learnt that the killer policeman was later tracked down and arrested by officers from Barnawa Police Division after the case was reported there.

Kaduna State Police Commissioner, Femi Adenaike, who confirmed the incident to P.M.NEWS, said it was true Alex Okpe was arrested and during interrogation confessed to have killed Murtala Aminu at a party venue.
Adenaike said Okpe claimed in his statement that he fired at Muri in “self defence” when he and his friends were trying fight him over his girlfriend.

He said the police didn’t send Okpe to Barnawa at that time and if he is found guilty, he would be dismissed and taken to court for trial.

“The suspect is in the cell and we have commenced investigation. And if he is found guilty, we will give him an in-house trial and summary dismissal so that he can face the law for homicide,” the state police boss said.

The blind father of the late Muritala, Mohammed Jimoh, told journalists at press conference at their High-Cost residence that as a Muslim he’s taught to accept the death of his son and bread winner as an act of God.

But he said if his son had to die, it should not be in the hands of a policeman who should have been responsible for protecting him.
“Yes my son , a first class economist for that matter and our hope, is dead, but I want justice done in this case,” Aminu said.

Until Murtala Aminu’s death, he was the youth leader, Catholic Holy Family Church, Barnawa.
He also owned a shawamar and roasted fish outlet at Narayi-Highcost.