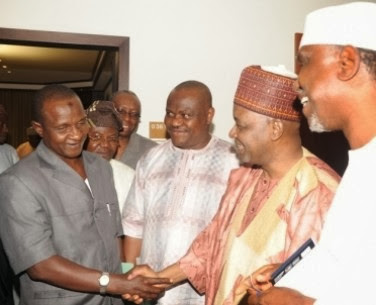 Towards ending the ongoing ASUU strike, the Federal Government has committed to spending N200 billion in the 2014 budget on the universities as well as on each of the next three-four years until the universities are brought to world-class standard as demanded by ASUU leadership.

This is in addition to the N100 billion dedicated and already made available…
Government has also increased to N40billion as a first installment, funds for payment of earned allowances to the striking lecturers, an improvement from the N30 billion previously released.

This information is contained in an internal statement at the Federal University of Otuoke by Professor Bolaji Aluko, its Vice-Chancellor.

On the earned allowances, Prof. Aluko said “Government will top it up with further releases once universities are through with the disbursement of this new figure of N40 million, so Vice-Chancellors are urged to expedite this disbursement within the shortest possible time using guiding templates that have been sent by the CVC.”

Professor Aluko said the development followed meetings on September 19 and Oct 11 of representatives of the Association of Vice-Chancellors of Nigerian Universities, led by Prof. Hamisu of ATBU and ASUU reps led by its President, Dr. N. Fagge with the Vice-President of the Federal Republic of Nigeria, Arc. Namadi. Sambo, Minister of State for Education, Nyesom Wike and others.

In the interest of peace, Vice-President Sambo appealed to ASUU to call off the strike and apologized over the “take-it-or-leave-it” comments made by the Minister of Finance, Dr. Ngozi Okonjo-Iweala.

Other points of agreement at the meetings include the following:
Project Prioritization:Universities will now be allowed to determine their priorities and not be “rail-roaded” into implementing a pre-determined set of projects with respect to the NEEDS assessment. Decisions are not to be centralized.
TETFund Intervention:Government assured that the operations of the TETFund will not be impaired, and that the regular TETFund intervention disbursement to Universities will continue, unaffected. So the NEEDS assessment capital outlays are in addition to regular TETFund intervention.
Project Monitoring: A new Implementation Monitoring Committee (IMC) for the NEEDS Assessment intervention for universities has been set up to take over from the Suswan Committee. The new one is under the Federal Ministry of Education and chaired by the Honorable Minister of Education. In addition, to build confidence and ensure faithful implementation and prevent any relapse as before, the Vice President will meet quarterly with the IMC to monitor progress.
Blueprint: ASUU was mandated to submit a blue print for revitalizing the Universities to the Vice President.

ASUU leadership will now meet to decide if the government should be trusted again, this time.