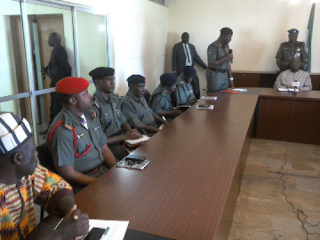 The Federal Government has dropped plans to relocate the Nigerian Army Institute of Technology and Environmental Studies, NAITES from its present location in Makurdi to Otukpo.The cancellation was announced by the Commandant of the Nigeria Army School of Military Engineering, NASME, in Makurdi, Major General Bamidele Ogunkale, today when he paid a visit to the Governor at the Peoples House.General Ogunkale therefore urged the people of the state to patronize the institution which he said has a steady academic program.He also apologized to Governor Samuel Ortom, for soldiers’ attack on a community in North Bank last Saturday, saying he has instituted a commission of inquiry headed by his deputy to investigate the circumstances that led to the incidence and assured that perpetrators shall be brought to book.The commandant maintained that the army would collaborate with other security ‎agencies to take an overall view of cult and other criminal activities in North Bank with the objective of curbing such conduct.He appealed to the state government to provide logistics to the school to enable it resume pumping of water to the neighboring community, repair a damaged culvert on North Bank-Yogbo road as well as resume Security ‎patrol on water ways.‎