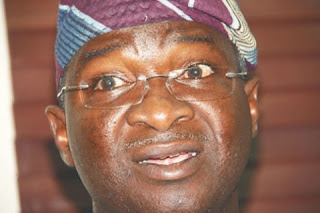 Immediate past governor of Lagos State, Mr. Babatunde Fashola (SAN), has said acts of terrorism currently perpetrated by Boko Haram and other insurgents in the country, have nothing to do with Islam or its tenets.
‎Speaking at the public presentation of a book, ‘Frontiers of Jihad: Radical Islam in Africa’, written by Dr. Yinka Olomojobi, held on Monday at the MUSON Centre, Lagos, the former Lagos governor noted that a religion, whose foundation was peace, such as Islam, could not be the foundation or excuse for acts of murder, r*pe, savagery, pillaging and terror.
Commending the author of the book for intellectualising the ongoing discourse on the real identities and motives of terrorists masquerading as promoters of the Islamic faith, Fashola called on Muslims and other Nigerians not to accept any reason given by the criminals to explain their actions.
Fashola said, “It is sheer propaganda to fool the general public and to deceive people in the name of a faith whose tenets they themselves breach and violate. The simple truth is that we have allowed the voices of a few criminals to rise above that of billions of law abiding global citizens.“What we are dealing with is a new wave of crime by criminals who seem to have an edge because of the need for a new global order and the gaps created by globalisation”.He, however, warned that guns alone nor nuclear weapons would not defeat terrorists or wipe away terrorism, saying the solution was possible through a collective agreement that terrorism had nothing to with religion as well as a collective decision to stop helping to promote the brands of insurgents by calling their names.
“That will expose them for what and who they are and help us to defeat them”, he said.
The event also had in attendance Governor Rauf Aregbesola of Osun State, who was represented by Dr. Adeleke Ipaye; Pastor Tunde Bakare; the Executive Secretary of Muslim Ummah in South-West, Prof. Daud Noibi; Chairman of Safari Books Limited, Chief Joop Berkhout and Chief Lekan Alabi, among others.‎