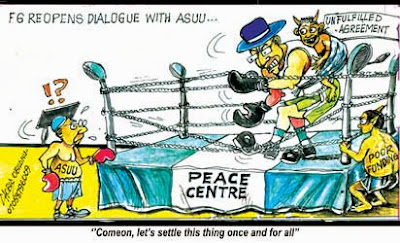 Labour activist and General Secretary, National Union of Electricity Employees, NUEE, Joe Ajaero has given the Federal Government one week to resolve its differences with the Academic Staff Union of Universities (ASUU) or cripple the country with the mother-of-all-strikes.
Ajaero who was speaking during the opening of a training workshop organized for labour leaders in Enugu, threatened to ally with other unions across the country to join ASUU on a solidarity stike if the impasse persists.
Ajaero said government was being insensitive to the plight of Nigerian students because the children of the rich are studying outside the country.

“If ASUU issue is not addressed, we will shut this country alongside other unions. We will ally with other unions and make sure that nothing works in this country.
This is not a strike based on demand, it’s based on agreement. As government, you must honour your agreement. Here, there’s no social security, the price of food is high, the same goes for electricity tariff. We are going to join our children to stay at home and let them run the system,” he threatened.
– See more at: http://gistreel.com/2013/10/10/asuu-strike-update-electricity-workers-threaten-nationwide-blackout-strike-doesnt-end-7-days/#sthash.oMuH1yIE.dpuf