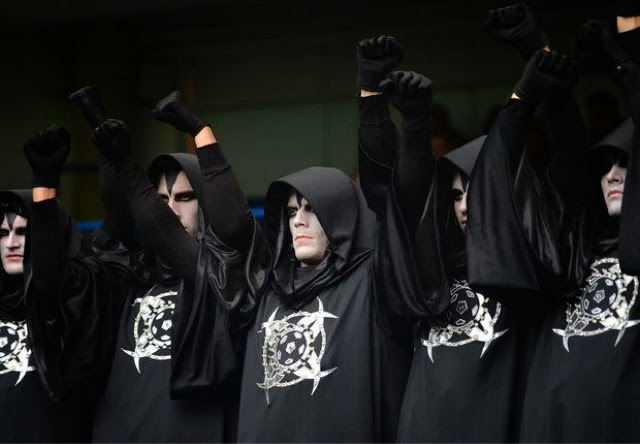 Another stadium was visited by strange guests over the weekend, with 11 hooded onlookers causing a stir at Stamford Bridge on Sunday

Chelsea’s Stamford Bridge became the latest football venue to play host to a gang of mysterious visitors on Sunday when 11 men in robes were spotted at the Premier League clash with Manchester City.
The figures closely resembled those seen at Saturday’s Bundesliga fixture between Bayern Munich and Hertha Berlin at the Allianz Arena. 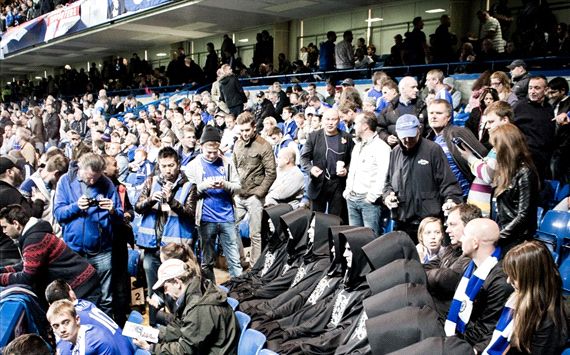 Shrouded in secrecy | The visitors provoked curious glances from Chelsea supporters at the Bridge
As in the previous sighting, they wore black robes with mysterious circles on their chest and were seen making curious synchronised movements at irregular intervals during Chelsea’s 2-1 win, while they also stood in unison at random moments. Situated three rows back from the corner flag at the Shed End, the gang could be clearly seen on TV cameras beaming pictures of the crunch fixture all across the world.
One Chelsea fan sat close to the mysterious guests was Robin Taylor, who said afterwards that he was slightly perturbed by their presence.
“We’re used to a few different characters down at Chelsea, there was once even a guy brushing his teeth behind the bench at a game, but we’ve had nothing quite like this before,” he said.

Watching the Kaiser | Franz Beckenbauer was pictured near a robed man at Stamford Bridge on Sunday
The appearance of the mystery men coincided with the surprise visit to Stamford Bridge of Franz Beckenbauer, the former Germany World Cup-winning captain and coach. The Kaiser watched the game from the VIP area and conducted media interviews. He subsequently released an extraordinary personal video which can be viewed from the link below.
The sightings at the football grounds follow a series of bizarre incidents involving the same mysterious circles at landmark locations – including London, New York and Rio – across the world.
Speculation over the events has hit social media, with discussions using the hashtag witnessed at the sightings: #WINNERTAKESEARTH