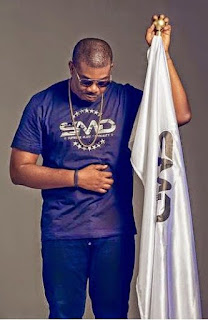 MAVIN‘s boss, Michael Collins popularly referred to as Don Jazzy, in a seldom interview with City People magazine, revealed the secret behind his great tracks. When the Producer was told he seems to have the Midas touch, he said: ‎ “I don’t know about the Midas touch, but I think what it is, is that, I understand the market first, I also understand people to a large extent, the common problem with people in the industry is not really understanding the individuals they deal with, either the artiste of their staffs, I run a very beautiful organization where everyone is friends. We are family,

I don’t come and start using veto power, because I am the boss, the greatest idea might come from the little guy there. So I listen to everybody and it works. As for music I try to experiment sometimes, but I don’t go out of the box to say I want to over experiment in a way that it is not what people want. If it is akara that you want to sell, it’s the akara that you will sell.
You don’t have to start putting jam inside akara. Then it’s not akara anymore, it is something else, the least you can do is to put small pepper to taste, you cannot now go over outside the box and say you want to put your name on top of the akara and stuffs like that. Over the years there has been the kind of music Nigerians like. This is the kind of music my mother and my father dances to and their friends too, then we just stick to the formula and it works for us”‎