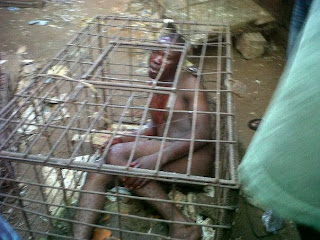 This is a photo of a man that stole a chicken at Relief Market Owerri, Imo state today, he received the beating of his life and Str!pped of his cloth and thrown into a the particular cage of the chicken that he stole.

This is really heart piercing and really sad for man to treat is fellow man like animal in this 21 century, just because he stole a chicken. According to information from those present at the scene, they said the man was lucky because the mob doesn’t want gruesomely do away with his live in broad day light.