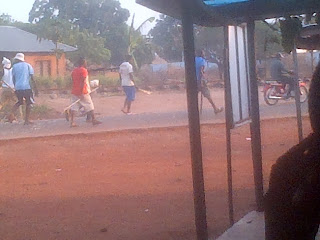 unfortunately… it was an extremely sad day for the idoma people of benue state and the Muslims as a tragic riot erupted between them. it all started at about 10am this morning because of the issue of selling goat. the hause poeple where instructed not to sell thier  goats by the road side but disoboyed the authorities , this led to serious confrontation and according to our sources the hausa poeple decided to go violent on the matter.

in an attempt of shooting one of the authorities, two Hausa men were shot dead in the process of self defense, this led to a series of demonstration and rioting by the Hausa people ..

finally this evening , the did was done and the idoma people took offense and burnt down some valuables… this might just spell the beginning of something bad in benue… lets hope not. stay tuned for more updates