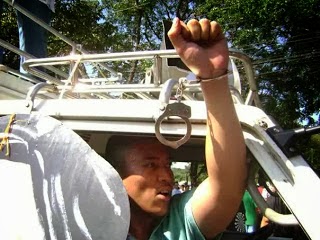 The police on Monday in Abuja arraigned a 22-year-old student, Ibrahim Salisu, in a Wuse Zone 2 Senior Magistrates’ Court for beating up a policeman.

Salisu, who lives at 4, Olumo Rock, Amasco Plantation Estate, Galadimawa in Abuja, is charged with joint criminal force and assaulting a public servant.

The prosecutor, Cpl. Anigbo Paul, told the court that Cpl. Chijioke Jacob of the Lugbe Police Station had lodged a report against the accused at the station.

Paul told the court that, on the said day, the accused had gone to the complainant’s house as he was about to park his car and beat him up.

The prosecutor said the accused and three others now at large beat the complainant while he was dressed in uniform and started trying to take his rifle from him.

He told the court further that, during investigation, Salisu confessed to committing the offence.

Paul said Salisu’s action was in contravention of the provisions of sections 79 and 267 of the Penal Code.

The News Agency of Nigeria (NAN) reports that the accused, if convicted, is liable to three years’ imprisonment or an option of paying a fine or both.