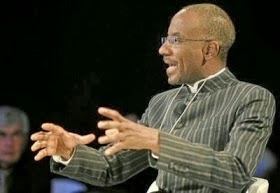 Speaking on the mess that is oozing out of President Goodluck Jonathan’s government, Sanusi Lamido told the AFP that Jonathan lacks the will to appoint truthful men and women, as he is surrounded by crooks. In the words of Sanusi: “His [Jonathan] greatest failing obviously is that he is surrounded by people who are extremely incompetent, who are extremely fraudulent and whom he trusts.”

Regarding the allegations against him, the suspended CBN chief said when he heard of a report condemning his performance, he wrote to Jonathan asking if an explanation is needed, but he received no reply.

He said, unfortunately, the first time he was formally notified of the allegations against him was the day he was suspended, that is Thursday last week. But Reuben Abati had lied to the media that Sanusi was queried for the alleged offences and he replied the Presidency.

According to Sanusi, the so-called kerosene subsidy money spent by the Federal Government in fact pays for “private jets, yachts and expensive mansion (of top public office holders) in Beverly Hills (United States) and Switzerland.”

He added that, “Since 2009, I have been annoying the government… There are people who think I have the wrong friends; people who think maybe I have not distanced myself enough from people who are seen to be opposition figures.”

Sanusi argued that the extent of graft in the NNPC might have reached an historic high. “I think everybody has known that NNPC is rotten. I don’t think it has ever been as bad as this,” he said.

Reacting to plans to arrest and keep him out of circulation, Sanusi said: “If I am sacrificed in whatever way, my freedom or my life… if it does lead to better accountability, it will be well worth it.”