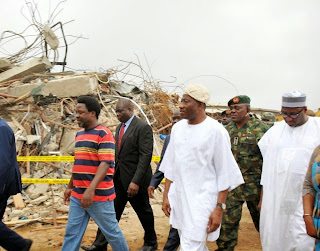 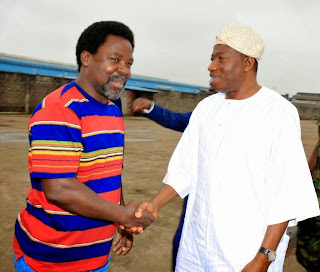 President Goodluck Jonathan yesterday paid a condolence visit to the Synagogue Church of All Nations (SCOAN) and here are the photos.
Describing the incident as ” a very sad story and very sad incident”, the president expressed his condolence to the Church members, the Head of the Church, Prophet T. B. Joshua and those who lost

their loved ones in the incident. He particularly condoled ‎with the South African people and their President, Jacob Zuma, whom he said he had already spoken with. Most of the victims were reportedly of South African origin.

“Today when I arrived Lagos, my first port of call was where a five-storey building collapsed and 80 people confirmed dead, about 131 people were injured. It is a very sad story, very sad incident to us and the international community because most of the people that died in that building collapse were not ‎Nigerians. In fact about majority of them are South Africans. I spoke to the President of South Africa, Jacob Zuma to first express our own sentiments and condolences to the President and people of that country”.

He also said he would convene a meeting of Nigeria’s state governors to fashion out ways of averting building collapse in the country.