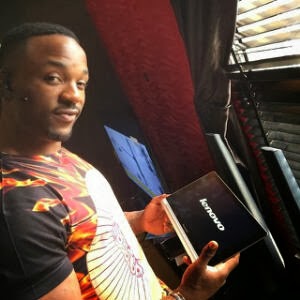 Some days back Iyanya posted his Instagram page to announce a new deal with Chinese giant, Lenovo. Well, according to TheNetng’s investigation, it is totally false and this is what they are reporting:
On February 6, 2014 Iyanya Mbuk announced to the world that he had bagged an endorsement deal, with yet another tech company, Lenovo. NET investigations show that the Pop singer’s purported endorsement deal might be totally fabricated.
The ‘Le kwa ukwu’ singer posted a photo of himself carrying a Lenovo product, ‘Yoga Tablet’ on social network Instagram with the caption ‘New Product !!! New Ambassador !!! Brand Ambassador !!!! Lenovo !!!! Iyanya !!!! Task Direct 2014 Started #triplemg’.
Iyanya’s manager when reached on the phone confirmed the deal, claiming they made about N150M – N170M from the deal. ‘It’s true, it cost about N150 to N170 million and the duration is for 24 months’, Ubi Franklin told a NET correspondent over the phone.
While the Pop singer received congratulatory messages from fans across the world and several blogs reported the story, NET made investigations over the signing and discovered that there might never have been one, as Lenovo says they don’t know anything about the deal.
The news of the signing was quite surprising and puzzling: why would a PC/tablet/Smartphone producing company sign Iyanya who is currently a double ambassador for PC producing company Zinox Computers and smartphone company SOLO Phone? Wouldn’t there be conflicts of interest?
NET also reached out to Iyanya and Made Men Music Group label publicist over the signing, who unconvincingly explained to our reporter that Zinox Computers acts as a parent company to Lenovo in Nigeria.
Just as you guessed, that doesn’t make sense.
Lenovo is a Chinese multinational technology company with headquarters in Beijing, China, and Morrisville, North Carolina, United States. The company’s gross revenue in 2012 was $29.57b. In 2005, Lenovo acquired IBM’s personal computer business and in 2014 have agreed to acquire the mobile phone handset maker Motorola Mobility from Google for $2.91bn. We’re just trying to say they are ‘big boys’ in the tech world.
It is worthy of note that there was no official statement from Lenovo or photos from the alleged signing unlike with Zinox and SOLO Phones.
Skimming through the official Lenovo website, we noticed that the Nigerian section of the web page redirects to the South African page. NET contacted Lenovo South Africa who then directed us to a rep in Nigeria named Mr Olumide. Lenovo SA also say they are not aware of the deal.
Olumide told our editors over the phone that he was not aware of any signing with Iyanya and told us to call back.
‘I can’t really say on that. I don’t know anything; I don’t know who he is. Honestly I don’t know anything, maybe you should call him and ask him yourself’, Olumide told our correspondent over the telephone.
NET also reached Zinox Computers via e-mail and telephone but didn’t get any response from them. An e-mail sent to consultants for SOLO Phone was not replied neither was are text message responded to.
Further questions sent to Iyanya’s publicist over the signing via e-mail were not answered.
Interestingly, NET discovered that Zinox recently opened a new online and retail outlet in Gbagada, Lagos called Task Direct. According to the company’s Corporate Communications Adviser Uche Nnadozie, Zinox will sell tech products from brands like Dell, Lenovo, HP, Zinox, APC, Samsung, among others. Apparently, that’s as far as Iyanya’s ‘relationship with Lenovo goes.
Punch Newspaper reports that Zinox ambassador Iyanya will attend the grand opening of the store.
‘There’s no signing, Iyanya is just trying to bounce some hype around and get some mentions online, which he did‘, a source in MMMG camp tells NET.