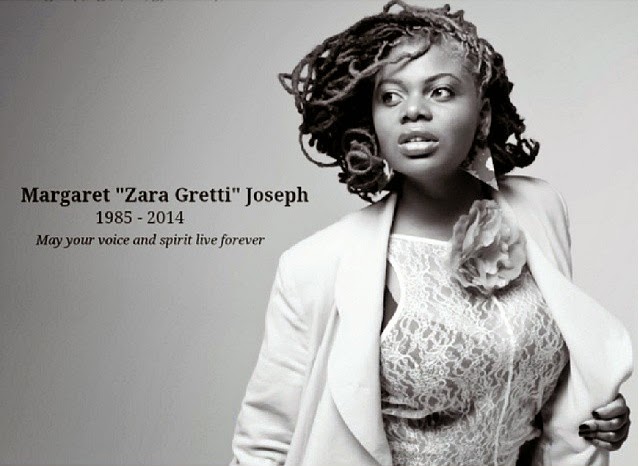 Margaret-Mary Oluwatoyin Ejiroghene Joseph also known as Zara Gretti passed away last Friday, March 28 after a 2-year battle with multiple sclerosis.
The 28-year-old who was popular for her hit song ‘Aboko Ku’ died at her Ogba residence in Lagos, Nigeria.
She started to gain grounds in 2007 when she became an independent artiste, having lived in both the United States and her home country. In Zara Gretti’s short time as a singer, she also churned out several hit singles like “The Flyest” and “Teno” and was managed by Toni Payne.
In the last 2 years, Zara shared via social media platforms; Instagram and twitter her struggle with Multiple Sclerosis and allowed her followers see her journey through the difficult times. She shared videos on Instagram about her difficulty to walk and sleep; her pain and discomfort and appealed to followers to help her get back on her feet again.
An official statement for the burial arrangements of the late songstress have been released by her family, it read:
Zara Gretti: Gone, Yet Lives On
The Clarus Babajide Joseph Family of Igbosere Lagos Island has announced the demise of their daughter, Margaret-Mary Oluwatoyin Ejiroghene Joseph, popularly known as Zara Gretti.
Known for her soothing lyrics, Zara lit up the Nigerian music scene a few years back before she was diagnosed with Multiple Sclerosis. Born in Lagos, to Eugene Kolawole Joseph and Abimbola Akindele, on July 30, 1985, Zara passed away on Friday 28 March, 2014 after a two-year battle with Multiple Sclerosis.
Zara will be buried at Ikoyi Cemetery on Friday 4th April after a Funeral Mass at 10am at Holy Cross Cathedral, Catholic Mission Street, Lagos.
Anne-Marie Palmer-Ikuku (Mrs.) For the Clarus Babajide Joseph Family
She will definitely be missed by all, may her soul rest in perfect peace.