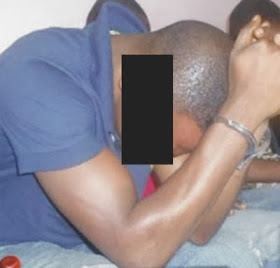 A man, who apparently has no job to enable him feed himself, has been sentenced to spend one year in prison after he was found guilty of stealing from the Mountain of Fire and Miracles church.

Police prosecutor, Sergeant Simon Ibrahim told the court that the convict was a habitual offender and had stolen from the same church in 2012. Sergeant Ibrahim said:

“He stole from the same church last year. He was charged before a different court and was sentenced to one year imprisonment. In fact, he was just released from prison just last week. I don’t think he is ready to change.”

36yrs old Ademola Ayeni was sentenced on Monday after he was convicted on charges of theft for making away with the offerings of the church members. He had been previously convicted of the same offence after he stole from the same church last year.

Magistrate Khadijat Mustapha convicted Ayeni for the offence without an option of fine, saying the sentence is meant to serve as a deterrent to those who might want to engage in similar acts.

Earlier, the Prosecutor, Sergeat Simon Ibrahim, told the court that (Pastor) Ojo Oyeyemi of Mountain of Fire and Miracles Church, Utako, reported the matter at the Utako Police Station on November 15.

Ibrahim said the convict criminally trespassed into the church just after they had concluded church service and stole an offering bag containing N50,800. He also stole two cheques worth N150,000 and N50,000