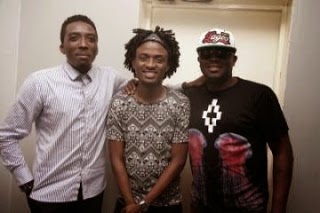 … Dr Sid Returns As Number One on The Chart.
Lagos, 31 March, 2014: On this week’s edition of Nigeria’s number one weekly show, MTV Base Official Naija Top Ten, popular comedian and actor, Bovi is the studio guest and – true to form – he gives everyone a good laugh during the chart countdown.
The comedian, who co-hosts this week’s show with MTV Base VJ Ehiz, joins in the frenzy of this week’s number one video, “Surulere” by Dr Sid featuring Mavin boss, Don Jazzy.

Bovi, who reveals this week chart with Ehiz, also throws a light but hilarious jab at Star Boy, Wizkid. He says, “Wizkid is the only Nigerian boy who adds to his age while others keep reducing theirs. I believe he has never shaved before because he is just sixteen and if he is really older than that, I dare him to put up his birth certificate on Instagram to prove his real age!”
Mavin signee, Dr Sid stays number one on this week’s chart for the second week with his monster single, “Surulere”. Fast rising artist, Patoranking is H0t on Dr Sid’s heels at number two with “Girlie O”.
Burna Boy falls three places down to number five as Davido and Ice Prince move up one notch each with the singles, “Aye” and “Jambo”.
Other artists on this week’s chart include 2Face, Wizkid, Phyno and Jesse Jagz, among others.
The MTV Base Official Naija Top 10: March 28 – 3 April 2014:
1. DR SID FEAT. DON JAZZY – SURULERE
2. PATORANKING – GIRLIE O
3. 2FACE FEAT. T-PAIN – RAINBOW REMIX
4. JESSE JAGS FEAT. WIZKID – BAD GIRL
5. BURNA BOY – YAWA DEY
6. DAVIDO – AYE
7. ICE PRINCE – JAMBO
8. SEYI SHAY – RAGGA RAGGA
9. WIZKID – ON TOP YOUR MATTER
10: PHYNO – PARCEL
Every week, the MTV Base Official Naija Top 10 is put together by an elite panel of judges comprising Nigerian broadcasters, music specialists and tastemakers, working with MTV Base to pick the winners and losers in the week’s chart. On the panel are DJ Humility (Rhythm FM), DJ Jimmy Jatt, DJ Xclusive (Cool FM), Big Time (Rhythm FM), DJ Caise (The Beat FM), Toolz (The Beat FM) and Osagie Alonge (Nigerian Entertainment Today).
The MTV Base Official Naija Top 10 premieres on NTA every Friday night at 11:30 pm (WAT). The chart rundown can be seen on MTV Base (DStv Channel 322) every Tuesday at 10 pm (WAT), on AIT on Tuesdays at 9.30 pm (WAT), and on STV on Thursdays at 6 pm (WAT). Next week’s chart will be unveiled on Friday 4 April on NTA at 11:30 pm (WAT).