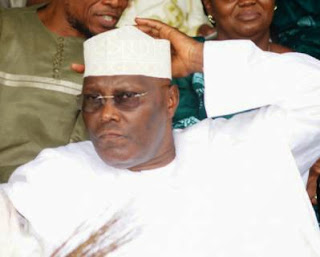 Former Nigeria Vice President, Atiku Abubakar has declared his interest in contesting next year's presidential election on the banner of the opposition All Progressives Congress (APC).

Abubakar Atiku
Speaking at the Shehu Musa Yar' adua Centre in Abuja, where he addressed a World Press Conference on Wednesday, the ex-founding member of the Peoples Democratic Party (PDP), expressed his determination and that of APC to give Nigerians the country of their dreams, devoid of corruption yet bent on enthroning change.

"I want to lead a government where there is zero tolerance for corruption, which will help Nigeria to rise and take its place in the world", he said.

"It is a call to serve that I have come to answer. With the support and prayers of Nigerians we will build a great new Nigeria for Nigerians".

He said that he had listened to the concerns of Nigerians while taking note of their never-say-die attitude. He commended the people for seeing hope despite the challenges and refusing to succumb to despair.

"This never say-die-attitude of Nigerians is the reason I can never give up on Nigeria", he said.

He urged youths to participate in the election, saying they represent the future of Nigeria and are endowed with enormous potential.

In a veiled reference to the administration of President Goodluck Jonathan, he said the future of the country should not be subject to experimentation or learning on the job.

"My politics has been guided by fairness and justice. I have what it takes to bring people together and make things happen. We need strong dynamic leadership that would create jobs", he said.

"With the support of Nigerians the APC shall form the next government in 2015. I have therefore decided to seek nomination on the platform of the APC to contest election for president".

This will be Atiku's fourth shot at the presidency, with all previous three ending in failures.

His first trial was in 1992, when he lost the presidential primary of the Social Democratic Party (SDP) to the late MKO Abiola.

In 2007, he came third behind Goodluck Jonathan and Muhammadu Buhari after contesting the presidency on the platform of the then Action Congress (AC).

In 2011, he lost the PDP presidential primary to Jonathan, and afterwards defected to APC.