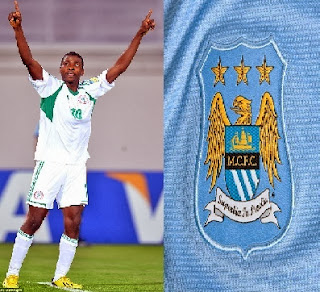 Nigerian wonderkid Kelechi Iheanacho will sign a deal with Manchester City, according to the player’s father. Iheanacho was named the best player at November’s Under-17s World Cup after scoring six goals, including one in the final, as his country triumphed in the United Arab Emirates.

MAN CITY LATEST 9/1Manchester City are 9/1 with PaddyPower to beat Viktoria Plzen 4-0 He has since been linked in his homeland with moves to Porto and Chelsea but his father, James, claims that the Etihad Stadium will be his next destination.

” Iheanacho senior later confirmed to MTNFootball.com that the player’s family made a joint decision on where he would go in a meeting on Monday night. “We prayed [on Monday] and, after due consultations with family members, we came up with Manchester City, believing he has a future there,” he explained.
“That is where he will be uplifted.” The young striker had been declared missing by his father on Friday after he had left his home in Owerri without alerting his family but returned early on Monday morning before a decision on his future was made.

James has been integral in his son’s fledgling career, with rumours that he had valued the starlet at €1 million (£840,000), though he denied those claims, declaring: “No, those people are my enemies. I never said that.”