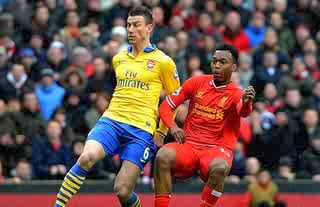 A Liverpool supporter has been stabbed to death in Kenya following the Reds’ 5-1 victory over Arsenal on Saturday, according to BBC News.
The man was killed after he taunted a rival fan, who supports Arsenal, about the full-time result.
The pair had been watching the game together in a bar in the town of Meru when things became heated in the aftermath of the shock result.
According to the BBC’s Angela Ngendo, it’s not uncommon for fights to break out during similar events in Kenya.
People pay money to watch Premier League matches in slum areas and cram into the rooms wearing their team’s colours.
Fans also bet on the outcome of matches and heckle each other during games, which inevitably increases tension levels.
However, it’s obviously rare for a clash to result in a murder, and this tragedy is evidence – if ever it was needed – that football is not a more important matter than life and death.