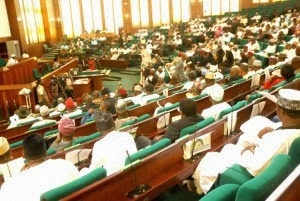 The suspension today of the controversial Governor of the Central Bank of Nigeria, Sanusi Lamido Sanusi has continued to cause uproar around the country.
The move has been criticized by many as an attempt to victimize Sanusi for speaking out about missing petroleum funds.
The House of Representatives has also spoken out on the matter and rejected the president’s action saying that it is “illegal and unconstitutional”.
Premium Times reports:
Mr. Sanusi was suspended today for what the president called “financial recklessness”; but many Nigerians believe he was punished for exposing the Nigerian National Petroleum Corporation, NNPC’s failure to account for $20 billion missing oil money, and how the government has failed to act on the matter.
Mr. Jonathan has already named Godwin Emefiele, the current chief executive officer of Zenith Bank, as new CBN chief, subject to the confirmation of the Senate.
But the House of Representatives on Thursday rejected the president’s decision, and accused Mr. Jonathan of acting outside his power, in a direct message that reflected the sentiments expressed by many Nigerians.
Former vice president, Atiku Abubakar, said whatever might be the offence, Mr. Jonathan should have followed constitutional process “instead of exceeding the boundary of his powers.”