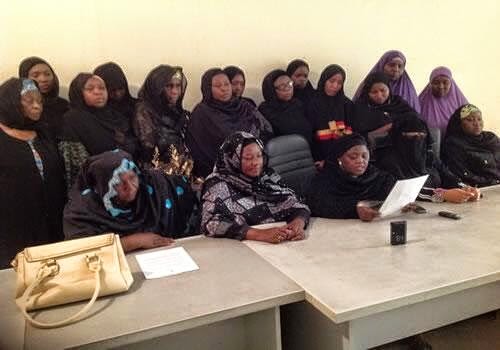 According to a report by Punch, the UK and US government have joined the search for the 234 abducted schoolgirls from the Government Girls Secondary School, Chibok, by Boko Haram men.
On Friday April 25th, the British Foreign Secretary, William Hague, said the UK had begun talks with Nigeria over the incident. (Some mothers of the abducted school girls pictured above)

“The appalling abduction in northern Nigeria on April 14 is a stark reminder of the threat of S3xual violence faced by women in conflict prone areas. I am very concerned that the majority of the girls are still missing. I spoke to Nigerian Foreign Minister, Wali, about this case on 18 April, and we are talking to Nigerian authorities about how best to assist in their efforts to secure the girls’ release and bring those responsible to justice.” Hague said. Continue…

Punch is also reporting that on Friday, the Nigerian Government also enlisted the intelligence services of the United States in the search for the abducted girls.

A competent security source said the Federal Government would rely on the higher technology of the US and UK to facilitate the search for the missing girls.

The source, who pleaded anonymity, stated that there would be no physical presence of operatives of the Western agencies in the operation to rescue the girls.

The source stated, “The whole emphasis is on intelligence gathering; and that is why the Federal Government is contacting the US and the UK to assist in the area of intelligence gathering. Another thing you must know is that several arrests have been made, and a lot of efforts are being made.

“The security guard at the school in Chibok is being quizzed and some people from the community too have been arrested,” the source said.