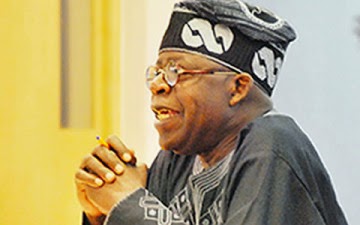 Everyday we hear new things from our politicians and as far I am considered let this election come and go so we can all have some peace – The latest is that, the Peoples Democratic Party Presidential, PDP, Campaign Organisation on Friday alleged that former Governor of Lagos State and national leader of the All Progressives Congress, APC, Asiwaju Bola Ahmed Tinubu, forced, Prof. Yemi Osinbajo, APC vice presidential candidate to swear to an oath to resign after six months in office, should the party win the presidential election.

And this according to the PDPPCO, is part of the move plotted by Tinubu to become president through the back door – Femi Fani-Kayode, the Director of Media and Publicity of the PDPPCO, while addressing a press conference in Abuja on Friday,had this to say:

“The wicked plot, as laid out by them, is to force Prof. Osinbajo to resign for Senator Tinubu to be nominated by General Buhari as his replacement.
“The ultimate objective of this plot is to ensure that Tinubu becomes President.
“The script is simple: given the questionable health of General Buhari, Senator Tinubu who is desperate to be president for his own selfish reasons will simply bid his time in the evil expectation that General Buhari will not be able to go the whole hog.”

And stated further that the reason the alliance between the defunct Action Congress of Nigeria and the Congress for Progressive Change could not work was the refusal of Pastor Tunde Bakare to resign as vice president for Tinubu to takeover from him – He said:

“Becoming the vice president is not the destination but becoming the president.
“The agenda of the cabal within the APC is with the perceived health challenges of General Buhari.
“They have told themselves in hushed tones that he (Buhari) has prostate cancer, acute asthma and that he suffers from dementia.
“This is their assessment and not ours. We do not know how true this is or what the nature of his illness is and neither are we interested.
“All these allegations of ill-health, to the cabal provide the justification for their evil plan.
“All structures around Buhari are all Tinubu’s structures. All the actors around Buhari that are driving his campaign behind the scenes are all Tinubu’s men.
“Most of the covert funding for this campaign comes from Tinubu’s friend outside the country and from Tinubu’s himself.
“So, if he becomes President, Buhari will become virtually incapacitated and he will not be the one running the government.
“Those behind this plan would now be waiting for Buhari to pass on. That is what Tinubu want to do to the North and to Nigeria.”

The PDPPCO Director of Media and Publicity disclosed that since the formation of the APC, Tinubu is its national leader and also its biggest financier, stressing that he single-handed produced the joint presidential ticket of Buhari and Osinbajo.
Fani-Kayode said what should baffle well-meaning Nigerians, is why Senator Tinubu has decided to draft General Buhari, despite his age, acrimonious background and questionable health status, into the presidential race whilst ensuring that his stooge, Osinbajo, was foisted on the general as his vice presidential candidate.

“How wicked can those that hatched this plan be? he quipped.
“How unfair can they be to the North, to General Buhari and to Nigerians?
“We wish General Buhari long life. Senator Tinubu’s dangerous plan is about getting power. This is sad.
“This is a wicked and ungodly attempt for Tinubu not only against the North and the Hausa/Fulani but against the whole country.
“We are convinced beyond any reasonable doubt that most Nigerians are not with this cabal.
“This is because no sane or rationale person would wish another evil to actualize his political ambition.
“We have deemed it fit to let the whole world know why the leadership of the APC is desperate for power and why the cabal controlling the APC is hell bent to ensure that General Buhari becomes president.”