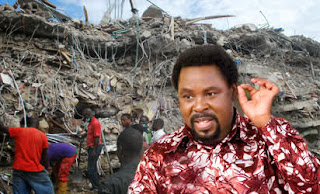 Pastor TB Joshua on Sunday said he would travel to South Africa in the coming weeks to meet families and survivors of a building collapse at his church that killed
scores.

TB Joshua-Synagogue Church
A guest house at Joshua’s Synagogue Church of All Nations collapsed on September 12 as more floors were being constructed on top of the existing three-storey building, leaving 86 dead and dozens trapped in the debris.

It is believed that there were 349 South Africans visiting the church in the Ikotun neighbourhood of Nigeria’s megacity Lagos at the time of the collapse.

South Africa is sending a plane to Lagos to retrieve survivors of the disaster that killed 84 South Africans, South Africa’s media outlets reported.

Joshua told the congregation during his weekly morning service that he “will be travelling to South Africa to meet people from South Africa and other nations who find South Africa easier to visit, in memory of martyrs of faith.”

Joshua also observed a minute silence “in memory of martyrs of faith”.
Nigerian President Goodluck Jonathan visited the church on Saturday and promised to investigate the cause of the tragedy.

He said he would hold talks with stakeholders in the construction industry on how to prevent a repeat of the tragedy, adding that he had expressed his sympathies to South African President Jacob Zuma.

Joshua, who has blamed the incident on sabotage, is one of Nigeria’s best-known evangelical preachers and is referred to by followers across the world as “The Prophet” or “The Man of God”.

He claims to work miracles, including raising people from the dead and healing the sick, and foreseeing disasters.