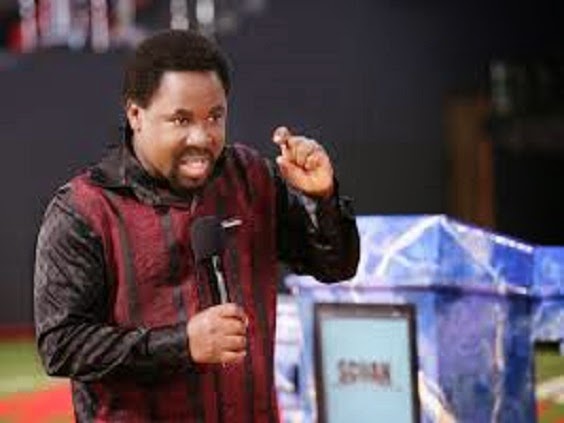 Renown Nigerian prophet and the general overseer of the Synagogue Church of All Nations (SCOAN), T.B. Joshua, yesterday came up yet with another prophecy.
T.B. Joshua, admonished his congregation to pray for Pope Francis of the Catholic Church and prophesied the upcoming plane hijacking by “militants” Nigerian Eye reports.
Speaking with his congregation, Joshua said he saw “a very big religious leader”, the one he characterized as a “father” figure respected by millions in different parts of the world.
Joshua continued that he had seen an alarming “vision” about him.
“I have been praying for him… They should pray for him,” Joshua proceeded, although not specifying which area people should direct their prayer towards… The clergyman I am talking about is the Pope.” Pope Francis.
The Nigerian prophet also claimed he had seen the “Breaking News” about the hijacker, a militant capturing the plane:
“They will attempt to enter a plane. You will hear ‘Breaking News’ of a hijacker inside the plane that carried the plane from its original direction to another direction. We should pray so that it will not just end like that and we learn that there’s a crash.”
The last statement probably referred to the tragedy, which occurred in the United Sates on September 11, 2001, when Al-Qaeda terrorists hijacked planes and crashed them into the towers of World Trade Center in New York.
“This is another big attempt they want to do.”
It would be recalled that last week Joshua prophesied a plane crash “in the unstable region near Russia and Ukraine” and urged people to pray for the US President Barack Obama, because the cleric saw him “being rushed to the hospital”. As for Obama, he said that the country leader would recover. He also spoke about a militant attack against a top official in Southern Africa, and in relation to this called for prayer for Kenya.