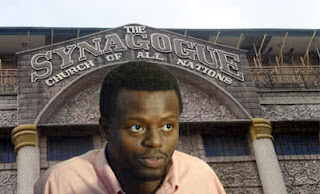 A Nigerian man on Friday claimed that he spent over 24 hours under the rubble of a Lagos church building, blaming “Satan” rather than structural failure for the collapse
believed to have killed at least 84 people.
Taiwo Taiwo was among 131 people pulled from the remains of the guest house for foreign followers of preacher TB Joshua’s Synagogue Church of All Nations (SCOAN), which collapsed on September 12.
Taiwo Taiwo
All those who died came from South Africa, the government in Pretoria said.
A week on, rescue workers were winding down search operations, after complaining that hostile members of the evangelical church prevented them from accessing the building in the first three days.
Joshua, whose followers call him “The Prophet” or “The Man of God”, has rejected claims of lack of cooperation and linked the collapse to a low-flying plane seen in the area beforehand.
Jeff Radebe, a South African minister in charge of Pretoria’s response to the disaster, said 349 South Africans had travelled to Lagos to visit the megachurch.
“As of yesterday evening (Thursday), the total number of unaccounted for South Africans and presumably deceased remains at 84,” Radebe said.
“This figure however remains tentative as it is still subject to confirmation through forensic tests.”
Taiwo told reporters in a briefing organised by the church that he was helping visitors at the guesthouse, which could accommodate up to 350 people in its dining hall.
“Most of them were actually in the church having a lecture from the Wise Man (Joshua). People were coming back to have their lunch,” said the 28-year-old.
“I just noticed a very sharp sound and I looked up and I saw the wall just coming off…, like something you see in the movies. It didn’t look real.
“Consciously, the (Holy) Spirit said to me, ‘This is not normal’. Next thing…, it was all dark. People were screaming, shouting. I just kept calm.”
Taiwo, who appeared unscathed apart from a bandaged finger, said the accident happened at about 1:10 pm (1210 GMT) and he was only pulled free at 5:05 pm the following day.
– Bad things come ‘from Satan’ –
Joshua has broadcast security camera footage on his emmanuel.tv network, which he said showed a “strange aircraft” flying low over the building four times between 11:30 am and 11:54 am.
The building is then seen to collapse at 12:44 pm, according to the camera’s time-codes.
Joshua, a self-styled miracle worker and faith healer who counts heads of state among his flock, called the incident “an attack on the Synagogue Church of All Nations and in particular Prophet TB Joshua”.
The Lagos state government has ordered an investigation and indicated that the addition of extra floors onto the building without strengthening the foundations caused the fatal collapse.
Survivors of the tragedy have so far not spoken publicly about their ordeal in Lagos, although South Africans who returned home have recounted their lucky escape from the rubble.
South Africa’s high commissioner to Nigeria, Lulu Mnguni, told The Times newspaper that one woman pulled out a steel bar that had pierced her chest and missed her vital organs and spine.
There was no independent corroboration of Taiwo’s account. Nigeria’s National Emergency Management Agency (NEMA) has said survivors had typically suffered broken bones and injuries from being crushed.
Taiwo, who said he was a recent graduate of the University of West London, also maintained that sabotage was to blame.
“I believe it was an attack. Obviously every thing that is not good comes from Satan,” he said.
“The idea… that people are thinking that it is a collapse, it’s not possible… I’m very sure of that because the structure was solid.”