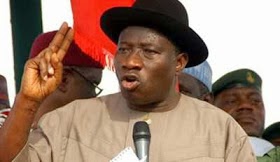 It’s common knowledge that some Nigerians are being stigmatized in some countries, over Ebola. Some have been denied entry into some countries over the disease. Reacting to this development in a statement issued by Special Adviser on Media & Publicity to the President, Reuben Abati

“President Goodluck Ebele Jonathan said Monday in Abuja that he expects and hopes that Nigerians will no longer suffer discriminatory checks and stigmatization abroad now that the World Health Organisation has certified that the country is Ebola-free.

Speaking at an audience with the Foreign Ministers of Germany and France who called on him at the Presidential Villa, President Jonathan restated the Federal Government’s displeasure over the stigmatization of Nigerians by some countries after the Ebola virus entered Nigeria in July through a Liberian traveller.He maintained that there was never any justifiable basis for the stigmatization of Nigerians since Ebola was rapidly contained in the country and never attained epidemic levels.He told the French Foreign Minister, Mr. Laurent Fabius and the German Foreign Minister, Dr. Frank-Walter Steinmeier that Nigeria will remain fully vigilant to prevent the re-entry of the virus because the Federal Government recognizes that the country will remain at risk as long as Ebola is active other West African countries or any other part of the world.President Jonathan assured the visiting Ministers, will therefore cooperate fully with other concerned nations to stop the current outbreak of Ebola in West Africa as quickly as possible.The Ministers told the President that they were in Nigeria to seek further cooperation with the Federal Government in the growing global effort to contain the current outbreak and continuing spread of the Ebola Virus Disease.They praised Nigeria’s successful containment of the virus and expressed the desire of France, Germany and the European Union to collaborate more with Nigeria in helping other West African countries where the virus still remains active.