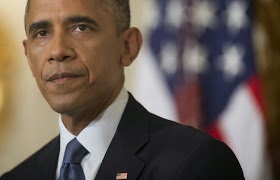 Disappointed by the refusal of the United States to help Nigeria procure military weapons to combat Boko Haram, the federal government has now openly expressed its dissatisfaction with the American government decision, arguing that the Americans were letting Nigeria down at her hour of need, Empowered Newswire reports.
While receiving a delegation of the U.S. Council on Foreign Relations yesterday, the Nigerian Ambassador to the United States, Professor Ade Adefuye said both the Nigerian people and the government feel abandoned by America.
“I am sad to inform you that the Nigerian leadership: military and political, and even the general populace, are not satisfied with the scope, nature and content of the United States’ support for us in our struggle against terrorists.”
“We find it difficult to understand how and why in spite of the U.S. presence in Nigeria with their sophisticated military technology, Boko Haram should be expanding and becoming more deadly”.
“The U.S. Government has up till today refused to grant Nigeria’s request to purchase lethal equipment that would have brought down the terrorists within a short time on the basis of the allegations that Nigeria’s defence forces have been violating human rights of Boko Haram suspects when captured or arrested.”
Indeed the US government had equally explained that it would not be selling military weapons to Nigeria due to human rights allegations against the Nigerian military.
But Mr. Adefuye, in his meeting with the Council on Foreign Relations, dismissed such allegations.
“A stable and secure Nigeria is an invaluable asset to America,” Mr. Adefuye concluded.