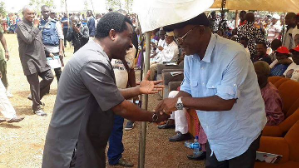 Benue APC gubernatorial candidate, Dr Samuel Ortom and his PDP counterpart, Prince Terhemen Tarzoor were pictured in a handshake in what is believed to be their first public meeting since both became candidates of their respective parties.
Though not planned, the two leading candidates met at the funeral of Pa Matthew Anyiku Agu at Taraku in Gwer East Local Government Area.
The picture shows them smiling as eye witnesses say they even shared jokes and laughed, to the admiration of many. This pleasant show should serve as an example to their supporters who recently engaged each other in a series of attacks.
See photos: