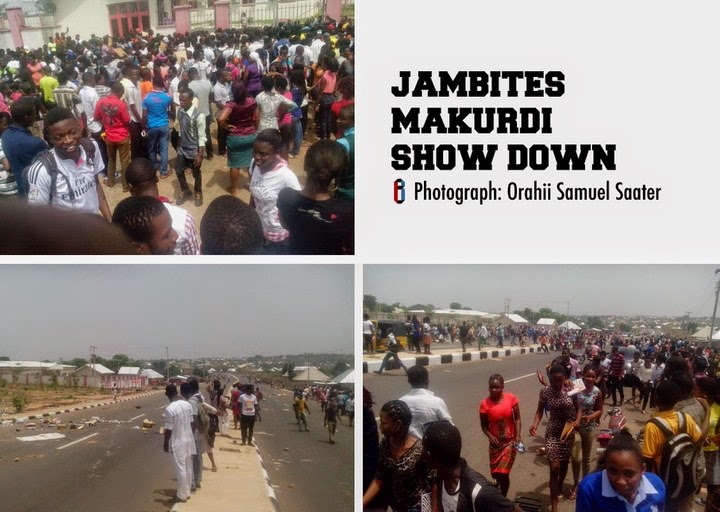 JAMB candidates protest over unwillingness by officials to provide them with registration printouts scheduled for collection today.
The protest which lasted for almost an hour caused heavy traffic along the Makurdi International Market Road as protesters barricaded movement of vehicles to and fro the area of the board.

It took the intervention of the Police who exchanged teargas with stones from protesters to restore normalcy, even as over four Hilux full of arrested candidates were seen being conveyed to the station by the Police.

Correspondent Samuel Orahii learnt that, trouble started when teeming candidates gathered for over 6 hours at the Makurdi Zonal Office of the Board unattended to by the officials whom they alleged were not concerned about their several hours of standing under the sun.

Speaking with one of the protesters who identified himself as Terfa accused the board of neglecting the plights of candidates, some of whom have traveled from different parts of the state to collect a document which the board officially slated by text messages to them.

In a similar reaction, another protester said the board was using security officials to intimidate complaining candidates. In his words, “for how long will they continue to use security operatives to shade them from a difficulty they caused over a thousand number of candidates?”

It would be recalled that the board earlier slated 21 February, 2015 for collection of printouts which witnessed massive turn up of candidates who were later addressed by JAMB officials to return home due to unpreparedness of the board.

Efforts to speak with officials of the board to get their side of the story proved futile as entrance into the office vicinity was sealed by the police.