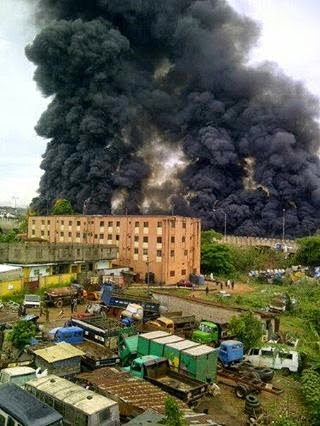 No fewer than four persons, including a pregnant woman, were feared dead yesterday after a gasoline-laden tanker somersaulted and exploded on the New Auto Spare Parts Market Flyover, Nkpor, near Onitsha, Anambra State.

The accident, which occurred in the afternoon as a result of what eyewitnesses said was brake failure and loss of control on the part of the driver, also wiped out thousands of livestock, tubers of yam, second hand clothing and other items worth millions of naira. Vanguard reports that eyewitness said by the time men of the state fire service arrived the scene, the tanker, birds in the livestock market and yams had been burnt. But that the fire fighters prevented the fire from extending to more kiosks. The driver of the burning tanker could not be located among the crowd that thronged the scene to assist in putting out the fire and rushing the injured victims to a nearby hospital for medical attention.