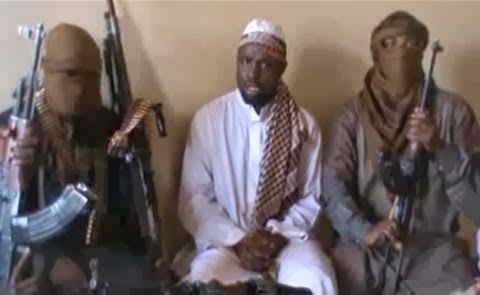 Boko haram leader, Shekau who many Nigerians thought to be dead as issued a much bigger threat. This time, he vows to destroy all the refineries in the Niger delta region.
Sahara Reporters Reports:
Barely a month after a respected cleric Sheik Auwal Albani was killed in Zaria Kaduna state the leadership of Boko Haram under Abubakar Shekau yesterday released a new video claiming the sect carried out the assassination of Sheik Albani.
“We killed Albani of Zaria; Shekau killed Albani of Zaria, and tomorrow he will kill Jingir, Shehu of Borno and Ado Bayero.”
Shekau who was dressed in military combat clothing spoke while his subordinates fired AK 47 rifles also vowed to go after one Sheik Yaya Jingir based in Plateau state along with many others he said would be killed because they are supporting democracy and are infidels.
Shekau also listed Generals Ibrahim Babangida, Muhammadu Buhari, Governors Rabiu Musa Kwankwaso, Kashim Shettima and also a former governor of Kano state, Mallam Ibrahim Shekarau as targets.
Shekau in the video distributed to select reporters the Boko Haram leader also stated that the sect will commence launching attacks in Niger Delta region and its refineries.
“We will bomb refineries there, those in Jonathan’s town and their leader should know. Shekau is talking to you; this small boy is talking to you, very soon your refinery will be crushed, and very soon, we will bomb this refineries you are flaunting. Niger Delta you are in danger, Jonathan you are in danger.”
He explicitly said that Boko Haram is fighting Christians and that they are the ones killing Christians since they are infidels.
The message stated Boko Haram will soon spread all over Nigeria to form their umpire and will kill whomever they found in schools reaching western education.