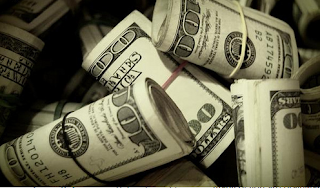 The National Drug Law Enforcement Agency, NDLEA, on Thursday arrested a  money laundering syndicate for swallowing $156,000 (about N32m) at Excel Oriental Hotel along Airport Road, Lagos.
The six suspects including a Bureau de Change operator were arrested in the hotel while they were busy swallowing the large sums of money with the intention of exporting $156,000 to Brazil.
According to a statement by the agency, those arrested are  Nwokenta Kingsley, 37, a Bureau de change operator, also known as Buchito; Onwuasoanya Augustine Chukwuemeka, 54, who lives in Brazil and Christian Okoli Ifor, 35, based in Brazil,Nwokenta Emmanuel Maduakolam, 31; Ezenwa Ikenna, 28, a specialist in wrapping; and Ezenwa Uzoma, a 33-year-old hotel manager.
Mr. Nwokenta Kingsley, a.k.a Buchito is said to be the brain behind the suspected criminal act. Mr. Kingsley allegedly supplied $120,000 to be swallowed and illicitly exported to Brazil.

“Onwuasoanya Augustine Chukwuemeka swallowed 74 wraps of dollars amounting to one hundred and eleven thousand ($111,000). Christian Okoli Ifor who resides in Brazil had forty-five thousand dollars which he wanted to swallow. Nwokenta Emmanuel who is the manager of Amazon Bureau de Change played a supportive role in the alleged crime. Ezenwa Ikenna was hired to wrap the money.“Onwuasoanya Augustine swallowed 74 wraps of dollars amounting to US$111,000. Christian Okoli who resides in Brazil had US$45,000 which he wanted to swallo