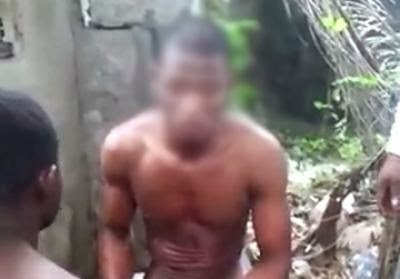 According to a new report on GaeyStarNews, 2 men in Portharcourt were forced from their home and made to Ma5turbate and have Ana! S3x in front of an angry mob on the 28th of January, 2014.
The alleged couple were informed on as being H0moS3xual. So in an act of jungle justice, a crowd gathered, forced them to leave the house and made them ‘re-enact’ the ‘H0moS3xual acts’ they allegedly were carrying out in private while the crowd filmed them. Then the footage was shared on social media.
In the video, the vigilantes are heard jeering as the large crowd of onlookers watched the men’s humiliation.
The photo below is from the video but has been blurred to protect the victims.