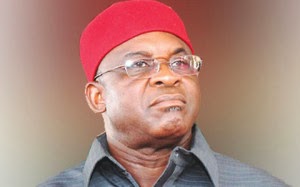 A prominent youth leader in Idoma land and the National coordinator Idoma Youth Emissaries for Mark (IYEMARK, 2015) Comrade Adanu Isaiah has predicted a land slide victory for the Senate President Distinguished Senator Mark in the forth coming PDP senatorial   primaries and by extension the 2015 general election.
This write up is a  swift reaction to the guardian News paper publication of Tuesday, September 9th, 2014. Were Chief Onoja Okibe Mike a senatorial hopeful under the PDP accused  Senator Mark of   poor performance  describing Marks continuous stay at the National Assembly as an embarrassment to the people of Idoma land, we look at this as un-patrotic, un-democratic and an aberration to portray a seasoned legislator and epitome of national unity in that light.
Chief,  Onoja  in his interview reaffirmed  that the forth coming general election will be accompanied with issue based campaign  boasting that he has what it takes the capacity to fight Mark and compete with him in the race.
I wish to state categorically that if  Mark  will heed the clarion calls of the critical stakeholders  like the youths, Idoma Leagues of professors, Students, Farmers and the physically challenged in  Idoma land to re-contest the seat of the Zone C senate he will win  convincingly even against  a boastful and energy sapped contestant like Chief Onoja who may likely use the red chamber  as his resting/sleeping place a development reminiscent with some delegates to the just concluded National  Conference in Abuja who finds  solace in sleeping while serious debate and decision are been taking on  the floor.
I believe that Idoma are more enlighten and wise to trade their pride, honor, integrity, happiness and joy on the alter of sentiment and campaign of calumny championed by Onoja and  currently   on  going  on the political turf ahead of the 2015 election and  as such  we will not be hood wink into believing what Chief Onoja is saying on the pages of news paper.
Among Mark’s numerous projects in Idoma land include:
* Provision of Employment: A handful of youth especially Nurses, Cleaners and Clerk  will be employed  in Otukpo in view of the relocation and citing of a major faculty of  the Federal University of Agriculture  Makurdi known as school of science which include faculty of  Law, Teaching hospital etc.
* Provision of Portable Water: The ongoing Otobi  Dam Water works  contrary  to the mendacious claims of Chief Onoja about water scarcity in Idoma land, this has the capacity to produce enough millions of little of water for the good people of Idoma and the generality of benue  people.
* Education: Mark has  changed  the  fortunes of education in Idoma land especially his donation of office building worth 70 million naira to the National Open University  Study centre Otukpo, N20,000.00  naira scholarship to  over 4,000 Students beneficiaries across the six geo political zone of Nigeria including  Idoma students in tertiary institutions both at home and in diaspora.
* Road Construction: Mark has done enough in the area road construction for been instrumental to the ongoing road Otukpo-Apa-Agatu road linking Idoma to Abuja at short interval in terms of the miles and kilometers.
* Bridge Construction:  Mark it was who facilitated the multi-billion naira Oweto bridge currently under construction which has since  near completion (80%).
With all these laudable feat  and land mark achievements  every right thinking Idoma person  should endeavor  to pray and support  Mark to continue his good work/job  for representing us well so that the hope of a better Idoma could be realized at the long run.